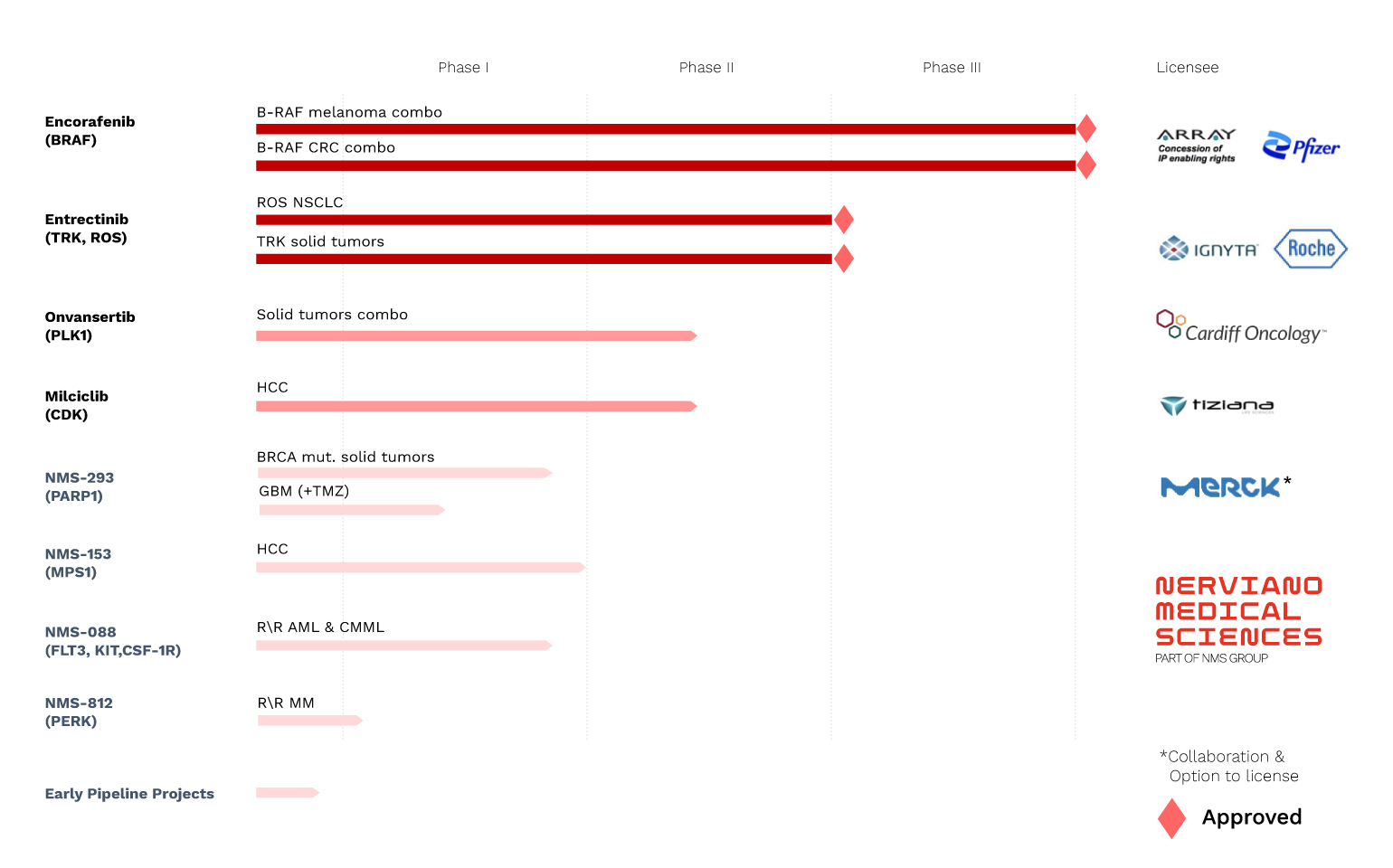 Encorafenib is a small molecule inhibitor of the BRAF kinase, a key enzyme in the tyrosine kinase/MAPK signaling pathway (TK-RAS-RAF-MEK-ERK), which is often mutated and activated in different tumors, such as melanoma, colorectal cancer, non-small cell lung cancer and others. BRAFTOVI is a potent BRAF inhibitor for which NMS has licensed enabling IP rights for commercialization. BRAFTOVI is approved in combination with the MEK inhibitor binimetinib (MEKTOVI) for the treatment of unresectable or metastatic melanoma with a BRAFV600E or BRAFV600K mutation. It is also the first B-RAF inhibitor approved  in combination with cetuximab (Erbitux®) for the treatment of adult patients with metastatic colorectal cancer (CRC) with a BRAF V600E mutation.

Entrectinib is a selective inhibitor of the tyrosine kinases TRK A/B/C, ROS1 and ALK, whose activating gene rearrangements drive proliferation in small subsets of different tumor types. Entrectinib was invented and developed into Phase I by NMS, then licensed to Ignyta (San Diego, USA) and subsequently acquired by Roche. Entrectinib is one of the first drugs approved with an agnostic indication for adult and paediatric patients with relapsed/refractory tumors harbouring NTRK gene fusions, independently form the tumor type. It is also approved for the treatment of adults with ROS1-positive, metastatic non-small cell lung cancer (NSCLC). Entrectinib was specifically designed to efficiently penetrate the blood brain barrier and it is efficacious also in patients with brain metastases, with a good tolerability profile.

Onvansertib is the first orally available, potent and selective inhibitor of the PLK1 kinase, a master regulator of mitotic progression which is overexpressed and activated in proliferating cancer cells. The drug was invented and developed into Phase I by NMS, then licensed to the US Biotech Trovagene/Cardiff Oncology. Clinical development is currently ongoing with promising results in Phase I/II studies in combination, including a Phase Ib/II study with FOLFIRI/bevacizumab for treatment of metastatic KRAS mut CRC, a phase Ib/II study in AML with decitabine and a phase II study with abiraterone and prednisone in patients with metastatic castration resistant prostate cancer.

Milciclib is an orally-available broad-spectrum inhibitor of cyclin-dependent kinases (CDKs), as well as other selected protein kinases responsible for controlling tumor cell growth and proliferation. It was invented and initially developed by NMS, then outlicensed to the UK Biotechnology company Tiziana Life Sciences plc, which is primarily investigating activity of the drug in hepatocellular carcinoma (HCC). Milciclib has shown tolerability and clinical activity in HCC as a single agent and in combination with regorafenib. Initiation of a Phase 2b clinical trial in liver transplant recurrent HCC patients with Milciclib in combination with a Regorafenib is planned in 2021.

NMS-153 is a potent, highly selective inhibitor of MPS1, with potential for first-in-class. MPS1 is a kinase found to be highly expressed in a number of human tumors that plays a critical role in the control of mitosis by regulating the spindle assembly checkpoint, a mitotic mechanism required for proper chromosome alignment and segregation during cellular division. NMS-153 is a molecule with long residence time on the target and selective against a wide range of tested enzymes. In vitro, a brief exposure to the compound is sufficient to commit cancer cells to death. Its anti-proliferative activity is associated with a demonstrated mechanism of action in different tumor cell lines, including hepatocellular carcinoma and broad in vivo efficacy both as single agent and in combination with standards of care. NMS-153 is currently in Phase I/II clinical development in hepatocellular carcinoma as single agent (2020-001002-26) and combination studies are planned.

NMS-088 is a potent inhibitor of FLT3, KIT and CSF1R kinases which play a role in Acute Myeloid Leukemia (AML), with potential for best-in-class. Activating mutations of FLT3 are present in ~30% of AML cases and are associated with an aggressive disease course and short overall survival. but First generation approved FLT3 inhibitors have improved patient outcome particularly when administered in combination with intensive chemotherapy but duration of response is generally short. NMS-088 is the most active compound among the FLT3 comparators tested in our labs, a finding especially evident in the presence of the FLT3 “gatekeeper mutation” which is associated with clinical resistance to treatment with other FLT3 inhibitors. The drug has shown synergy and tolerability in combination with different standard of care treatment in preclinical models of AML. Furthermore, there is a rationale for the use of the molecule in Chronic Myelomonocytic Leukemia (CMML) on the basis of the demonstrated inhibition
of CSF1R, a highly expressed and activated target in this tumor type. Based on our preclinical findings, two Phase I/II studies are ongoing in relapsed/refractory or unfit AML and CMML patients where NMS- 088 is being explored both as single agent (2018-002793-47) and in combination.

NMS-293 is a second generation PARP inhibitor that differentiates from other approved or advanced molecules in its unique selectivity for PARP1 vs PARP2 enzymes and low DNA trapping activity, both features potentially linked to lower haematological toxicity and higher potential for combination with DNA damaging agents in a wide range of tumors, covering high unmet medical needs. It also has a superior ability to penetrate the blood brain barrier, a very important feature supporting its utilization in CNS tumors and brain metastases. The drug has shown high anti-tumor activity as single agent in BRCA mutated preclinical tumor models and synergy and tolerability in combination with chemotherapy.
Based on these findings, NMS-293 is currently in clinical development as monotherapy for the treatment of patients with BRCA mutated breast, ovarian, prostate and pancreatic tumors (NCT04182516) and in combination with temozolomide in recurrent glioblastoma (NCT04910022).

NMS-812 is a novel potent oral inhibitor of PERK (PKR-like endoplasmic reticulum kinase) that also inhibits GCN2 (General Control Nonderepressible 2), with potential for first-in-class. PERK and GCN2 are effectors of the Integrated Stress Response (ISR), a pro-survival pathway exploited by cancer cells to survive stress. PERK is a key effector of the unfolded protein response (UPR) and GCN2 is a sensor of amino acid deficiency. Both proteins modulate the eIF2α/ATF4 axis promoting tumor survival and drug resistance as well as, via direct and indirect mechanisms, the immune response. Cancer cells are subjected to extrinsic and intrinsic stress conditions, such as hypoxia, sustained oncogenic growth, and high rate of protein synthesis, which result in UPR activation as a survival mechanism. Tumors arising from professional secretory cells, such as multiple myeloma (MM), have a constitutively activated UPR due to intensive immunoglobulin production coupled with malignant growth. PERK/GCN2 inhibition causes MM cancer cells death due to proteotoxicity. In preclinical models of MM, NMS-812 has shown good efficacy, with UPR pathway modulation and tolerability, and synergy with standards of care. Based on preclinical findings, a first in human Phase I study of NMS-812 as single agent and in combination with dexametasone is ongoing (NCT05027594).

Welcome and Check out our new motion picture!